Our meeting on the 11th was a joint meeting of 3 Rotary Clubs. Hosted by the Ashburton Rotary Club. Members and partners from Lincoln, Ashburton Plains and Ashburton clubs met at the Hotel Ashburton for the meeting of the three clubs.

President Gary from the Ashburton Rotary Club formally introduced our guest speaker, Candice Tait. Candice is from England and arrived in NZ after backpacking across the world as Covid hit. She is now based in Raglan and has an involvement in Ashburton with Genesis Capital as an investment partner.

Candice explained that she is a UK qualified accountant and that she is currently doing a PhD on the topic of Climate Change Sustainable Finance. There are three main aspects to this known collectively as ESG (Environmental, Social and Governance). The work involves studying the climate change policies of major companies and the effect this has on the mood of investors considering where to allocate their finance. She has approached 311 companies who have provided 491 shareholder proposals. She has studied them for their statements on areas such as deforestation and greenhouse gasses. Alongside that she has studied their share market performance to see what effect climate change awareness policies have. 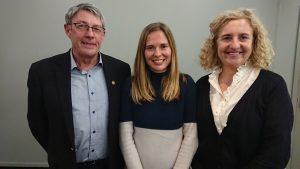