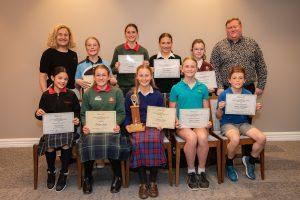 Speech Contest
Back row: Carolyn Cameron (President), Layla Singleton, Isla Gilbert, Penny Redfern, Daphne Burns, David Jones (NBS, Sponsor).
Front Row: Meja Besande, Madeleine Howden, Hayley Stocker, Addison Griffiths, Harrison McCormick.
Along with the speech contest, schools are encouraged to nominate students for an Honour Roll. These students are recognised mainly for their citizenship and community service participation in both their school and community. It is nothing to do with being the top student or the best sports person but may well be the top student in attitude, application, commitment and service to others.
This year we have so far presented 4 certificates to nominated students