The  Primary Schools’ Speech Contest began in the Mid-Canterbury region by the Rotary Club of Ashburton Plains in an effort to encourage young people to gain experience at public speaking.

The students participate in at least 2 rounds before being selected for the final – class, school and then a cluster of schools.

The final for the Year 5 & 6 students was staged on Wednesday 7 September at the MSA.

The venue was full to overflowing as a large crowd gathered to enjoy the presentations. The nine speeches showed impressive creativity and oratory skills from the participants, a credit also to their parents and teachers. Topics were varied and included consumerism (as seen on TV!), a war on cats, what belongs on a pizza, and cohabiting with dinosaurs.

Adjudicator Matt Marshall congratulated the finalists and noted that humour and persuasion featured strongly in the speeches presented. Engaging the audience was a key requirement. The consistently high standard made it difficult to assign placegetters, with the final scores covering only a 9-point range. 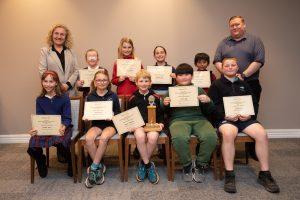 The contest was won by Angus Hamilton from Methven Primary School, second was Violet France from Mt Somers Springburn and third equal were Steven Zhu from Netherby and Delilah Bown from St Josephs School.

Honour Roll
Along with the speech contest, schools are encouraged to nominate students for an Honour Roll. These students are recognised mainly for their citizenship and community service participation in both their school and community. It is nothing to do with being the top student or the best sports person but may well be the top student in attitude, application, commitment and service to others.

This year we have so far presented 4 certificates to nominated students. 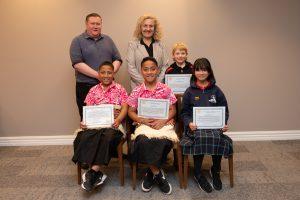