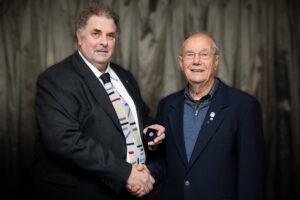 An Ashburton Rotarian has been honoured with a Paul Harris Fellowship Double Sapphire Pin for his efforts on behalf of the Ashburton Plains Rotary Club and the community.

In the last 51 years Plains Rotary has used the Paul Harris Fellow Award to recognise those who have contributed to our Rotary Club or to The Rotary District to which we belong.   The Club has also presented Paul Harris Fellowships to non-Rotarians who have made an outstanding contribution to our community. Click here for full story.